NOTES FROM THE HEARTLAND...AND MY HEART

The New Year has definitely started off with a bang- I’m in the Midwest freezing my California Girl butt off, furiously multi-tasking on three projects simultaneously, and really and truly counting my blessings!

The main and most important  reason I’m in Kansas is that I’m acting in award-winning director Steve Balderson’s new film, a romantic comedy called “Occupying Ed”. It’s such a funny, clever script by Jim Lair Beard,  full of twists and turns. Everyone working on the film is really talented, sweet and FUN! Steve  somehow always manages to pull together a fabulous cast and crew that bond immediately and this film is no exception.

On January 5th, I shot a new instructional DVD at   the beautifully restored landmark, The Columbian Theater in Wamego, Kansas.  Based on one of my most popular workshops, “Strike A Pose: How To Make The Camera Love You” was directed by Steve Balderson, as well. 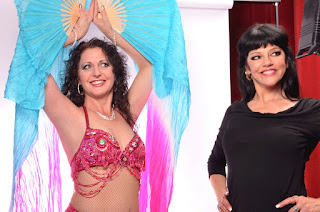 The DVD is full of tips and tricks to designed to help anyone  relax  in front of the lens and look great in pictures of any type.  Just some of the follow-along instructional poses include:  classic pin up and cheesecake posing, various types and genres of belly dance poses burlesque/showgirl poses, acting headshots, and character looks.   I wrangled local belly dancer Nashid and her troupe, The Eyes Of Bastet from Manhattan, Kansas to act as my models for the shoot, and they did a bang-up job!  English actress Holly Hinton (she’s playing the female lead in “Occupying Ed” even joined in and she modeled for   some of the cheesecake using a chair as a prop…she’d never done pin up modeling before and she’s a natural. 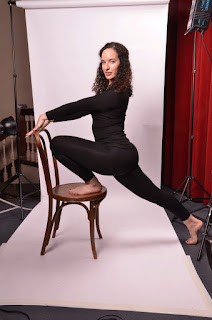 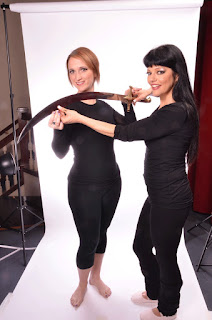 Maharet Hughes, an incredible photographer and graphic artist (and a belly dancer of course!) drove in from Missouri to act as the on-set photographer for the DVD, and she’s also designing it’s cover…and she’s designing my new soon-to-be-published book, “The Belly Dance Handbook”!  The book is actually based on this blog posts- but it’s got waaay more info than I could ever possibly put down here. Basically, it’s a sort of “belly dance lifestyle” book… a companion for serious dance students and professionals alike.  There are chapters on everything from performing and handling stage fright to home drilling and costume care… from stage make up, stage directions and creative cross training to belly dance travel- and more!  The book will (hopefully) be out in late March.  I’m so proud of it- I hope you all like it as much as I do!

Maharet and I have been trying to get together for the past year and a half to work on the book, but  my  touring schedule always got in the way. Somehow the stars aligned for this time period. I’d never in a zillion years be able to pull off either the DVD or the book without her. She’s a total hoot- we’ve been close friends ever since she sponsored me for workshops a few years ago, and she’s got the mad skillz with photos and graphics.

So yeah… I’m literally bursting with happiness so grateful to be starting 2013 in such an incredible way, collaborating with a lot of creative, talented people, on film and in print. 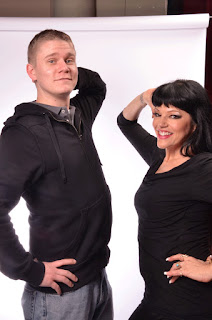 Top to bottom:  With  belly dancer  Nashid ,  actress Holly Hinton luxuriating on the chair,  posing  dancer Kathryn Harth with  a scimitar and last but certainly not least...production sound man Michael Page gettin' his glamour on!
Posted by Pleasant Gehman/Princess Farhana at 9:10 PM