SALLY FORTH! SELECTING, CARING FOR, WORKING WITH AND TRANSPORTING SALLY RAND FANS


Sally Rand Fans are an amazing prop for dancers- they’re gorgeous, lush, theatrical fans, made of ostrich plumes, and they look simply incredible onstage. They convey the glamour of a bygone era, and wow audiences with their stately, sensuous beauty. They’ve been a staple in burlesque and showgirl performances for decades, and have also become hugely popular with belly dancers in the last decade or so. Mounted on strong plastic, Lucite, wooden or bamboo staves, these fans will open and close fairly easily, but still will not snap open the way smaller fans do because of the bulk of the feathers plumes.

For beginners, using Sally Rand fans will take a bit of getting used to because on the type with Lucite or plastic staves, the butt-end of the fan is very thick. The staves are usually divided by metal or plastic washers, which enable the staves- mounted with bulky feather plumes- to open and close properly.

These beauties can have a single row of feathers, or can be layered with up to four or five rows of large ostrich plumes.  Because of the relative heaviness of the staves themselves, the large circumference (or “wing span”) plus the bulk and weight of the plumes, these fans can be difficult to handle at first, and you will definitely have to build up strength in your arms and shoulders.

If you’re new to working with Sally Rand fans, there are many on the market to choose from. All sorts of  Sally Rand fans can be purchased on eBay, and lots of them are from China. The quality of the Chinese fans is usually very good, and the prices are amazing.  I got a few sets when I was performing in Hong Kong, and they’re all amazing.

However…The less expensive fans might be very costly to ship for Asia- makes sure to read the fine print…  And also be sure that the price includes a pair of fans, not just a single fan!

While professional  or experienced dancers usually agree that “bigger is better”, if you’re just starting out with Sally Rand fans, the larger ones might be almost overwhelming to you, size-wise and strength-wise.  Even for taller gals, the smaller or “petite sized” Sally Rand fans still look impressive; they’re a lot easier to handle and they are much more convenient to store and travel with!

Speaking of travel, a good way to transport your fans to gigs , or even  for checked luggage on a plane, is to use a  sturdy, large document tube. These can be purchased at office or art supply stores, and will protect your fans in transit. I use them all the time, and  have never had to replace even one of them. The document tubes, depending on circumference, will hold a pair of fans easily, and the smaller  sizes will fit into most standard suitcases ( though not  carry-on sized) as well.

To store ostrich plume fans, I use a large, tight-locking  plastic container, wrap the fans in plastic dry cleaning bags, and throw in a handful of cedar chips to keep the moths away.

Also, it’s really worth spending the extra money that may be charged for male plumes. As with most species of birds, the male ostrich plumes are far more lush and thick than the female plumes.  Even if you’re using smaller-sized Sally Rand fans, the thicker male plumage will make the fans look rich and impressive. 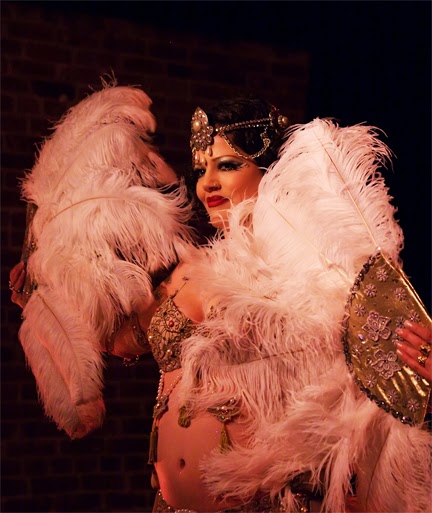 Before you purchase your fans, check the sizes of the height and spread. If the sizes aren’t listed on the website, don’t bother purchasing- you don’t want to wind up with a tiny set of hand fans!

Another good thing to know is that your computer monitor might display the color of the feathers significantly darker or lighter than the way they will appear in person.

Making your own Sally Rand fans from a kit  might seem  more cost-effective, but if you're not a crafty type  gal,  spending a few extra bucks on already assembled fans will probably be worth the money...and the hours  you spend getting frustrated  trying to put the fans together on your own!

And again, whether you’re purchasing fans domestically or from overseas, check on the prices for shipping!  As I said before, even the smaller fans   are still pretty large, and no matter what size you get, the shipping package will not be a standard size!

Before you practice or perform with any sort of fans – but especially Sally Rand fans--make sure to do a complete warm up of the hands, wrists, arms and shoulders, along with the rest of your warm up. 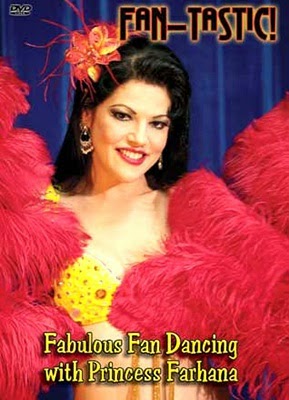 Posted by Pleasant Gehman/Princess Farhana at 12:35 PM No comments:

BACK IN THE SADDLE AGAIN: RETURNING TO DANCE AFTER TAKING A BREAK 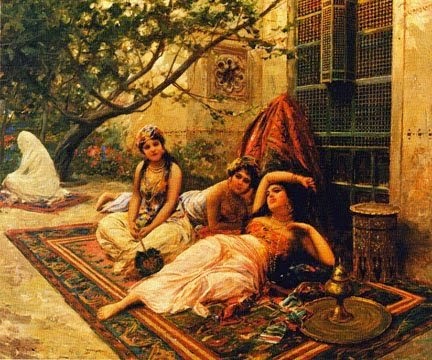 Since many of us have taken a holiday break, I thought the first post of 2015 ought to be about getting back into the swing of things dance-wise. Sure, many dancers work during the holidays- and I am one of them- but still, all that un-structured downtime, studio holiday closures and…well, yeah… all those sweet treats we’ve indulged in do take their toll! You show up for class, rehearsal or a show and mentally, you’re rarin’ to go, but the next day you feel like you’ve been run over by a truck. Why? It’s because you’re a dancer living in a body that- even if it’s only been a few days- has gotten used to sitting at a table swathed in a cozy fleece onsie munching on leftovers and drinking booze!

Of course, this doesn’t only apply to the holidays… you could be getting over an injury, illness, or maybe you’ve had a surgery- or a child! In any case, bouncing back after being sidelined for a while     ( even a little while) might not be as easy as you thought it was going to be.

Here are some ideas that might make the transition a little easier for you.

Go Easy At First
By that, I mean cut yourself some slack… but I don’t mean slacking off! Acknowledge the fact that you haven’t trained for a while and take things slowly.  Whether you’ve been gone for a few days or a few weeks or months, ease back into dancing.  Your brain thinks it can do what you were capable of, and your muscle memory probably does too- but your physical body might not exactly be down with that concept…yet.  Test the waters a little; you definitely don’t want to be so gung-ho that you injure yourself in the process of trying to prove yourself.

If you’ve been out because of an injury, make sure you’ve followed your doctor’s orders to the letter.  If you were prescribed physical therapy, make sure you’ve completed your course before you even think of returning to class or performing.

Any medical restrictions that have been placed on your dancing due to injury are there for a reason, and that reason is to insure you are healthy enough to continue   your dance practice!

Prepare Yourself Physically…And Emotionally
Be sure to warm up completely- this should be your regular M.O. anyway, but many of us just kinda skip over this process, because it seems so tedious.

Warming up is integral to being a healthy dancer, as is cooling down- especially after you’ve taken a break!  Maybe you need a longer warm up than you did previously. If so, go with it.  Remember, even a scant few days out of the game can make a big difference, so do some light cardio before stretching- your tight tendons and lazy, underworked muscles will thank you profusely!

Emotional preparation is in order right now too. That means accepting your situation- no guilt, no shame, no little inner voice cutting you down cause you can't shimmy or turn, gained a few pounds or don’t have the stamina to last as long as you did before you took some time off.  Now’s the time to be your own cheerleader, not your worst critic! You want to motivate- not denigrate- yourself  back to work.

Remind yourself that it can often be frustrating as you return to peak condition, so be gentle on yourself emotionally. Whose the meanest boss in the world? You are. Fire that slave driver and have your own personal Human Resource Department hire a compassionate coach who can see your potential and help you get back into fighting shape in a positive way, ok?

Work Hard…But Work Safe
When you return to your “regularly scheduled program”, do the absolute best that you can, but do it safely.  It’s always better to err on the side of caution than push your boundaries a little too far. Remind yourself that this situation will change soon. Allow your body to re-familiarize itself with your dance practice.  Remember, our muscles don’t listen to reason. If you over-do it, the only way they know how to protest is by shutting down…going into spasm, or (yikes) getting strained or torn.  Let them know whose boss, but baby them! Soon, they’ll once again be your obedient servants.

Last but definitely not least, remind yourself that  your situation is temporary, it will pass…and you’ll be back to where you were sooner than you thought you’d be!

Back by popular demand!
The  outrageous “One Zill Up”  tee  features  a universally understood symbol…driving the point home with a  finger cymbal!
The black short-sleeved shirts are 100% soft ring-spun cotton jersey , with a slim fit for a feminine silhouette and a tear-away tag.
Available in women’s MEDIUM, LARGE & X-LARGE.
$20.00 plus postage & handling here:
www.princessfarhana.com/shop.htm 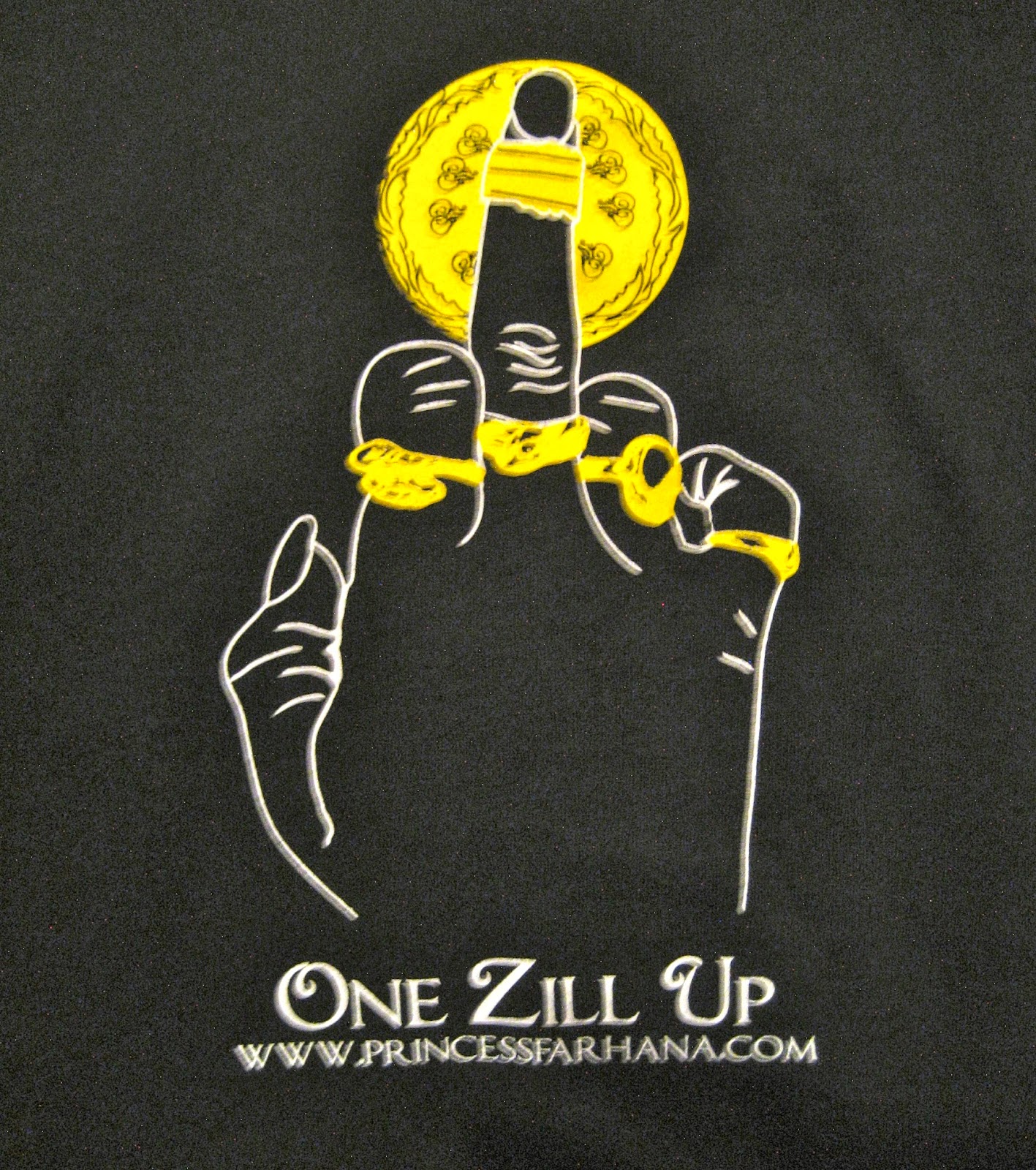 …And while you’re at it, get your signed copy of  The Belly Dance Handbook: A Companion For The Serious Dancer

Posted by Pleasant Gehman/Princess Farhana at 11:24 PM No comments: