HAPPY NEW YEAR FROM BEYOND 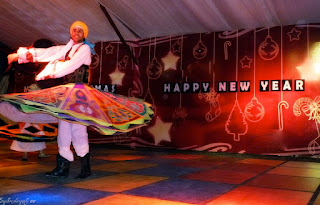 In 1999, during the days leading up to The New Millennium, like many people, I began reflecting on life: historical events I had witnessed, personal goals that I had achieved and all the things I had accomplished.

But what seemed to really dominate my thoughts were the many significant relationships I had with family and friends. I was blessed with so much love, nurture and support. I thought of the many special people who were there for me not matter what… friends and relatives who shared their lives with me, gave me affection, support and influenced my creative and artistic endeavors.

One of these individuals was my friend and belly dance mentor, the late Zein Abdul Al Malik.

Zein was a male dancer of prodigious talent. Well over six feet tall and lanky, he had piercing green eyes and performed draped in luxurious folkloric garb, wrapped in antique Egyptian Assuit, a traditional mesh fabric that has small strips of silver hammered into it to form designs.   Zein looked imposing and exotic balancing a huge brass tray with a full tea set and candles upon his regal head.

Zein began his career in the San Francisco Bay Area in the mid 1970’s, dancing with one of the mothers of contemporary belly dance, Jamilla Salimpour.  He went on to live in Morocco and Saudi Arabia, where he resided in one of the royal palaces, thanks to his Saudi prince lover.  Zein lived and breathed Oriental Dance, performing, teaching and doing research.

After we met in 1990, he took me under his wing- me, a beginning baby belly dancer with barely any skills- but somehow he saw my potential and nurtured me. Zein would have me over to his apartment- a wonderful, mysterious enclave of inlaid North African furniture, luxurious plants and relics from the Middle East.

He’d make me fresh mint tea in a silver Moroccan teapot and we’d spend hours together while he showed me steps and technique, discussed belly dance traditions, and watched vintage clips that he’d taped from the television in Saudi Arabia, featuring 1940’s and ‘50’s Golden Age Egyptian movies which starred famous dancers like Naima Akef, Samia Gamal, and Tahiya Carioca.

Zein also helped me select costumes, heartily encouraged my dancing, and got me my very first dance job at Hollywood’s Moun Of Tunis Restaurant, where he worked.  More than two decades later, whenever I am in Los Angeles, I still perform there.

Appropriate music for Middle Eastern dance was hard to find in America back in those days, and Zein made me many Arabic mix tapes- remember, there were no CD’s back then- with the cassettes featuring everything from classic live Om Kalthoum performances to the latest in Egyptian pop and Algerian Rai music.

Every cassette Zein made me also had a special cover that he thoughtfully put together by hand. Some featured Middle Eastern clip art others  photocopies of vintage Turkish cigarette boxes and pictures of famous belly dancers like Nagwa Fouad and Soheir Zaki.

Tragically, Zein died about five years after I met him. By that time, we were close friends and because of his encouragement, we were also gigging together regularly. I was absolutely devastated. I remember speaking-or rather blubbering through a speech- at his memorial, my face wet with flowing tears, but I don’t remember a thing I said.

I thought of him often, so many things reminded me of him. At gigs when I felt pre-show jitters, I would think of the way he used to calm my nerves through  his twisted humor right before we  both went on. Wrapped in a turban and wearing a brocade galibiya, shimmying to warm up, with an ever-present Marlboro in his mouth, Zein would sense my anxiety, catch my eye, make an exaggerated coquettish gesture then and whisper in a feminine falsetto,

Somehow, our private joke never got old, and always made me laugh. Whenever he did that, I had a great show, entering the stage with a huge grin on my face. Even though Zein has been departed for years, I always think of him just before I go on.

So…fast forward to New Year’s Eve 1999, at five minutes of midnight. Of course I was at a belly dance gig, in a dressing room, wearing a brand new costume- my first costume for the New Millennium.

The dancer I was working with that evening asked what music I was planning to dance to for my first dance set of the century.

Suddenly, something fell into my hands, a small plastic case. Though my suitcase was always chaotic, there was a method to my madness, and it was always re-packed before every show. The little plastic box was decidely an unfamiliar object that I didn’t remember packing. Recognizing what it was in the dim dressing room lighting by the feel of it alone, I wondered how it got there.

“Hey, no way, there’s a cassette in my dance bag!” I cried, kind of amazed.

“You still use cassettes?” the other dancer asked incredulously.

“Well, no, not for years”, I answered, dumbfounded,

“I have no idea what it’s doing in here!”

I glanced at the clock- it was now one minute before midnight. Thinking we’d better figure our music out, I turned the mystery cassette case over in my hands.

The cover featured a black and white drawing of a 1920’s flapper lounging in a champagne glass.

As the clock struck midnight and the new century began, I got chills.

Posted by Pleasant Gehman/Princess Farhana at 11:21 AM