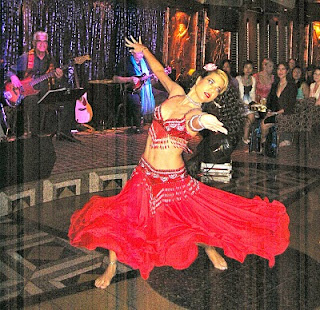 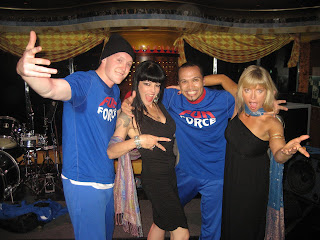 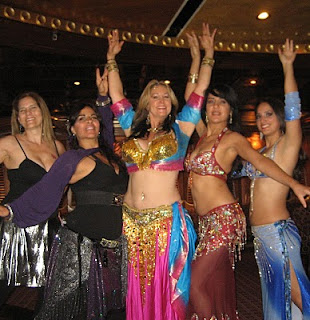 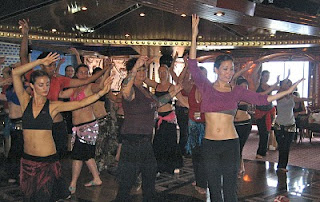 I just returned from Michele Nicola’s Arabian Nights At Sea Belly Dance Cruise to Ensenada, BC Mexico. This year marked the 14th annual voyage, but it was my first year on board The Carnival Paradise. It was definitely one of those experiences that makes me feel so fortunate and grateful that my life involves doing something I love- dancing, teaching dance, traveling, and meeting great new friends.

It was also so much fun that I am completely hoarse from three full days of non-stop laughing, not to mention yelling and zaghareeting over the din of live Arabic drums and dozens jingling hip-scarves!

Nearly two hundred belly dance cruisers attended, from all over North America- there were even two dancers from such a remote place in Canada that it had taken them four planes-and two whole days- to get to the ship!

The ship had plenty of on-board activities, shore excursions in Ensenada, and relaxation opportunities. The classes were wildly varied, including Tribal Fusion, Jazz-Influenced, Oriental, Veil, and Mahalia’s instructional henna workshop.

My other co-instructors were Fahtiem, Ava Fleming, The Shimmy Sisters, tabla master Reda Darwish, Ashley Lopez and my cabin-mate, the lovely Paulina, to whom I am now permanently and irrevocably bonded.

Paulina and I had a three night slumber party that included talking shop, doing each other’s make-up, and waking up at six am to barking sea lions…not to mention marveling over professional break dancers who spun on their heads, and sharing mojitos in a hot tub that just happened to be full of foxy twenty-something guys.

Oh, I forgot to mention the cucumber!

What happens on the ship isn’t gonna stay on the ship- at least THIS time! Here goes:

Paulina was already settling in as I entered our cabin. As I plopped my luggage down, she greeted me in a rather unusual way.

“I brought you a present!”, she chirped brightly, brandishing a giant, light green cucumber. She then whipped out another one and added,

“And I brought one for myself, too,”


I wasn’t exactly sure how to take this rather… unique greeting, and I guess my confusion kind of showed on my face!


Finally, noticing that I seemed flustered, Paulina clarified that she had grown them in her Ojai garden, and had thought they might make a nutritious snack for us in between classes and performances! We both got a great big belly laugh out of that.


Live music for the shows, which took place in the ship’s lounges, and theaters, were provided by Doug Adams and Light Rain with Reda Darwish guesting on tabla. I have loved Reda’s drumming for years, but I gotta say that watching him play live- and dancing to his talented drumming- brought things to a whole new level! He is a beaming ray of light when he plays, all the joy just pours out through his talented hands.

On Saturday night, Light Rain and Reda played for an amazing open dance party on the top deck of the ship, near the pool. They sounded fantastic! Not only were all the A.N.A.S instructors and students reveling, there were many “civilians” who happened to be on board joining us. There was an entire Persian family, whose daughter and mother-in-law joyfully joined us in dancing for hours, and a whole crew of old Egyptian folks whose veiled women clapped and zagareeted wildly from the ship’s balcony. Fahtiem and Ava Fleming engaged in uproarious ballroom dancing, Ashley Lopez got her groove on, and The Shimmy Sisters put on an incredible, gymnastic hoping show, complete with belly dancing- and contortions!

The cruise ended with a cocktail party that included a fabulous show, including Turkish dancer Nilay Enjin, Jan, Angela and many more, which photographer Richard Lowe documented for posterity. After dinner, there was an all night dance party in the ship’s Rex Lounge.

Right now, I’m recovering from my working “vacation” and still giggling at what went on…because aside from the cucumber incident, what happens on board stays on board!

Paulina and me with the break dancers

Participants from my "Strike A Pose: How To Make The Camera Love You" workshop

Check A.N.A.S out and sign up for next year!!
http://www.arabiannightsatsea.com/
Posted by Pleasant Gehman/Princess Farhana at 12:01 PM