A TIP OF THE HAT TO THE FEZ


On July 14, Roxxanne Shelaby put on a belly dance show  with live music  at Brazil Brazil Cultural Center in Los Angeles...but this was no ordinary show- it was ground-breaking  and intimate, seamlessly blending  different decades of belly dance history, both from LA and beyond.

The show was organized to  raise funds for a documentary film project Roxxanne is working on about The Fez,  the celebrated Arabic nightclub that became a famous Hollywood hotspot, which was owned by Roxxanne’s late father, Lou Shalaby. A talented musician and extremely well-loved club owner, Shelaby created an amazing atmosphere at the Fez, making even first-time customers feel like family, and introducing thousands of patrons to the beauty of Arabic music and dance. 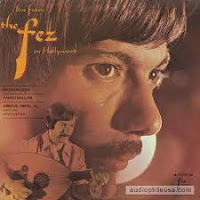 The Fez was located on Vermont Avenue in the heart of Hollywood. The instant it opened it’s doors in 1959, it became not  “ just” a nightclub, but the breeding ground for Arab arts and culture on the West Coast. The immensely popular club not only became a center for the Arabic community in Southern California, but a catalyst for creative Arabic performing   artists which on to inspire generations of musicians and dancers well beyond Los Angeles. Much of the hubbub around the Fez came from word of mouth, but a good portion of it was largely due to the popular in-house recording “Live At The Fez”, which featured the house band and was a hugely popular album back in the day-and is now considered a coveted collector’s item.

Just some of the Just some of the internationally acclaimed and now legendary dancers that performed at The Fez were Feiruz Aram, Syrian-born   Antoinette Awayshak, and gorgeous Greek performer Helena Vlahos.  Aisha Ali and Sahra Saeeda- both known world-wide for their incredible dance ethnology research and field recordings, worked there as well…as did women who were quite famous at the time and during the course of their careers gave birth to belly dancing daughters who are equally well known!  These women are Marta Schill  (author of the book “The Complete Belly Dancer” and mother of Belly Dance Super Stars dancer Jayna Kouzouyan) Janaeni, the proud mom of world renowned performer Ansuya, and Tonya Chianis, whose daughter is Atlantis Long, who, with her mom, produces the Belly Dancer Of The Universe Pageant, now entering it’s 24th year!

The Fez was also a favorite haunt of the Hollywood glitterati during it’s time, with customers including the likes of Marlon Brando, Lee Marvin, Jayne Mansfield and television personality Danny Thomas- who was known to frequently lead debke lines at The Fez!   Other celebs who were regulars included Peter Law ford, Richard Thomas (no relation to Danny, the actor known as “John-Boy” from the television show, “The Walton’s”) and basketball great Kareem Abdul Jabbar, among many others.

At her show at the Brazil Brazil Cultural Center, Roxxanne created the same cozy atmosphere that The Fez was famous for.   In fact, it felt more like a wonderful family reunion than a show, with generations of Los Angeles Arabic musicians and the wonderful “dance mammas” who taught and inspired practically everyone else that was in the room! Truthfully this was not only one of the best belly dance shows I’ve ever seen- and I’ve seen literally thousands.  The buzz around the show itself was incredible, and it was attended by many belly dance greats, including former Habibi publisher and famed dancer Shareen El Safy, IAMED’s Suzy Evans, dancer, Aubre Hill, composer Dr. Samy Farag,   former Fez  performers  Feiruz Aram,  Barbara Al-Bayati, Jawahir, and scores of well-known local dancers as well.

The show featured guest stars Jillina, Tamer-Henna, Cory Zamora, Anaheed and Lee Ali, who, although she never worked at the Fez, was performing on the East Coast at the same time and currently oversees the popular 1970’s Belly Dance group on Facebook.  She kicked off the evening with a purely nostalgic period-perfect rendition of a medley of 1960’s and 1970’s belly dance hits.

But the best part was that (most of) the original band from The Fez, as well as many of the dancers who were featured there regularly performed. Many of the musicians and dancers who performed are well into there sixties - and in some cases even more mature- but they became magically young and electric the moment they started playing and dancing.  The band consisted of  violinist Maurice Saba, Rico Orel on oud, percussionist Var Daghdevirian, and tabla player Achmed Al-Asmar.

It was marvelous to see full sets by these incredible performers, including all the amazing  “old-school” American Cabaret / Vintage Orientale bells and whistles-   gorgeous veil work, lots of zills, dynamic live drum solos, and Fahtiem even did a Sultan Act with a very pleased member of the audience! Anisa, of Anisa’s School Of Dance did a cute flirty folkloric number, Aisha Ali was elegant, Helena Vlahos was regal and lithe and kicked ass (as usual!) on her cymbals.  Atlantis performed in a massive 70’s style cape in place of her mom, who was just enjoying the show and having a ball.  And of course, it was super-amazing to witness all the past history- and current scene come together...pure magic!

During the show’s intermission, Roxanne screened a selection of interviews with the Fez dancers. The footage was shot beautifully, and the interviews were priceless- ranging from affectionate reminiscing to crazy backstage anecdotes.

The night ended about three hours later than it was supposed to… which was no surprise because nobody wanted it to end at all!

But it doesn’t have to end… as I stated previously, Roxxanne Shelaby is in the midst of writing, directing producing a documentary film   (co-directed by Greg Williams with cinematography by David Rapka) about The Fez.

Find out more about The FEZ Documentary here:
https://www.facebook.com/pages/The-FEZ-documentary-project/259555070765907

If you wish to contribute to The FEZ project- any amount will help- you can do so here:

Read  “Great Moments At The Fez” by dancer (and Fez favorite!)  Feiruz Aram, in a vintage issue of Habibi Magazine   here:
http://thebestofhabibi.com/vol-13-no-4-fall-1994/lou-shelby/