TRUST IN ME: DANCING WITH SNAKES 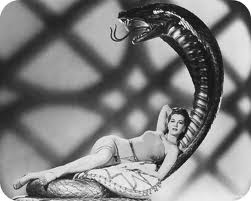 Throughout the years, serpents have always been associated with belly dancers, even though dancing with snakes has no foundation in traditional oriental dance.

From a modern perspective, the association with snakes and belly dance probably  came about because the serpentine undulations in oriental dance echoes the movements of the snake, but  serpents have worshipped for centuries, linked with rituals, the supernatural and the divine. We are all familiar with the serpent that tempted Eve with knowledge in the Garden of Eden, but in the ancient cultures of Egypt, Mesopotamia, Minoa and Crete, snakes were highly symbolic. They were often associated with goddesses like Ishtar, Egyptian deity Renenutet,  and the gorgons of Greek mythology, including Medusa, were female human/snake hybrids. Serpents were also an important part of the Dionysian cults, and in pre-Christian  rituals in the West.

In India and The Maghreb (Morocco, Algeria, Libya and Tunisia) snake charmers are still a common sight on the streets and in the souks. In America  and Europe during   the last century, women  belly dancing ( or doing an approximation of belly dance) with snakes were often a staple in touring carnival sideshows.  The 1967 Disney film The Jungle Book , featured  the number  Trust In Me ( The Python's Song)  a sardonic ditty performed by Sterling Holloway, as Kaa the serpent, who attempts to seduce the main character Mowgli, before making a meal of him. This song has been covered extensively by  rock and roll artists ( by Siouxsie And The Banshees and The Dead Brothers, among others) and has become popular with fusion style  performers dancing with snakes.

The use of snakes within contemporary belly dance is widely thought to have originated with the storied pioneer Jamila Salimpour, who danced with snakes in her groundbreaking Bal Anat shows during the 1970’s at the Northern California Renaissance Faire.

Today, belly dancers of all styles incorporate snake dancing into their shows, with the most commonly used snakes being pythons or boa constrictors. These breeds seem hardier and more adapted to stage work, and can grow to impressive sizes as well.

If you are thinking about owning –and dancing with- a snake, there are many points to contemplate:

First, snakes are NOT dance props; they are living creatures that need tender loving care the  same way any companion animal would.

Housing And Feeding
Snakes need to be housed in containers,such as a large aquarium or reptile cage that is climate controlled, well aerated and most importantly, secure. These reptiles can definitely rival Houdini in that they are notorious escape artists; they can squeeze through very small openings and are also liable to push out of an unsecured cage door or cage lid quite easily. They are also shy, particularly during molting, and will need plenty of room in their enclosures to hide.  Snakes need to have a sizable water bowl  (which will have to be changed and cleaned often) in which to soak. Their living spaces will also have to be cleaned out completely at least every few weeks.

Snakes are predatory and carnivorous-they like to eat mice, rats, frogs, earthworms-even baby chicks. Though they usually only feed every couple of weeks, they do need to eat, so if you think that putting live prey in their cages will freak you out, it’s comforting to know that most snakes will accept a meal that has already been killed… but this will  mean that you’ll most likely have a freezer full of dead rodents!

Transporting Snakes To Gigs
When you are bringing a snake to a show, your foremost concern should be the snake’s comfort and well-being.

Many dancers use large woven baskets or those self- locking plastic crafts containers (with holes drilled into the lid) padded with blankets or towels. Another option is a pet carrier, again padded for warmth.

Once you arrive at your gig, find an out-of-the-way to place to store your snake’s temporary home that isn’t cold or drafty. Some dancers even take along a small heating lamp along to add warmth. If you’re sharing a dressing room, let other dancers know that there is a live snake present and ask them to be respectful of its comfort. This will keep your snake safe and secure, and also serve a warning to anyone who may have a snake phobia…which will avoid creating chaos backstage!

Dancing With Snakes
Snakes need to be approached slowly and handled in a calm, firm and deliberate way.  Their bodies need to be fully supported, and they must to know that the person handling them is relaxed. Snakes get stressed from sudden movements and they can also sense fear or nervousness, which will make them become agitated. One you have taken your snake out of it’s house, let your snake slowly discover you, remaining still while the snake slithers around your body, exploring. 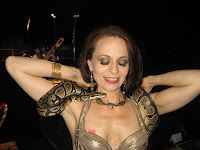 Never attempt to dance with your snake until you are comfortable handling it!

Before you start dancing with your snake, select a costume that will not harm him. Your snake dancing costume should be sturdy, and in my own opinion, smoother and less decorated is better. Beaded fringe and other delicate or potentially sharp embellishments (hello… the prongs used to set rhinestones and crystals) are not a good-or safe-idea.   Many dancers wear coined costumes while dancing with snakes, but again, check that the coins don’t have jagged or sharp edges that can potentially injure your snake.

Snakes really cannot be trained, period. Snake dancing usually means letting the snake slither and glide around you while you perform, therefore, slower musical pieces and improvisation are mandatory, because you can never be sure what kind of mood your “dance partner” is in!

Remember that your snake is a reptile, not an entertainer!

Respect this, and mentally prepare for anything that might occur during the course of your show. Your snake may be frightened by bright stage lighting, loud decibels, and the crowd you are dancing for. Also, some vibrations in the music itself can potentially make the snake edgy.  He might want nothing more than to hide in your hair, or he may get aggressive and try to bite you, or start to constrict you. Move slowly and carefully, and try not to agitate the snake.

When you are done performing, bring your snake back to his traveling container, and try to get him back home into a safe and quiet environment as soon as possible.

Do I have to tell you never to leave your snake in a parked car? I thought not!

Posted by Pleasant Gehman/Princess Farhana at 11:22 AM