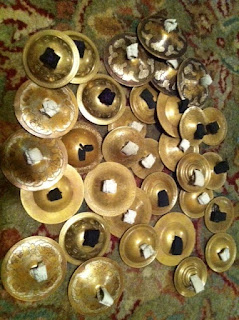 Finger cymbals might as well be the international symbol for belly dancing.

Cymbals and veils are usually what civilians imagine when they think of belly dance. Known as zills in Turkish, sagat in Egyptian Arabic and salahsi or zang in Farsi, many dancers assume cymbals are a prop, but they’re actually a musical instrument.

Cymbals make a variety of sounds, depending on how they’re played, ranging from bell-like ringing with an audible sustain to clicks, muffled claps, and quick-strike chunky tones. The pitch of the cymbal itself differs considerably, depending on the construction; the metal alloy (usually brass or bronze) the circumference or diameter of the cymbal, and the depth of the rounded dome that rises up from the cymbal’s rim. Finger cymbals are manufactured in a wide variety of sizes, weights and finishes, many with beautiful Pharonic or Arabesque designs stamped or cast on the metal.

There are four cymbals in a complete set, worn at or just above the first knuckle of the thumb and middle finger on each hand, attached with an elastic loop. Some cymbals have a hole to thread the elastic through, others have two slots. Often, dancers have a preference for the type with the slots; because they are easier to control- I much prefer this type myself. I used to think the cymbals with a single hole were just mediocre souvenirs, and that only a beginner would even think of using them. They kind of dangle off the fingers, instead of sitting firmly on the underside. Then I bought a gigantic set of cymbals in Cairo, the type that are used in Egyptian orchestras…and that set only had the single hole! Years later, Artemis Mourat set me straight, explaining that both types of cymbals were “legit”, and used traditionally.

Playing cymbals used to be practically mandatory for belly dancers (hence the public’s association) but in the early ‘90’s, when Egyptian style became popular in the west, performers hoping to appear “authentic” hung up their cymbals because Egyptian dancers rarely used them. What most didn’t realize was that the real reason Egyptian dancers didn’t play was because they didn’t have to! In Cairo, professional performers work with large orchestras that always include a master sagat player. I was guilty of this misconception myself, and in the midst of my early studies, blithely informed my first teacher Zahra Zuhair, that I wasn’t going to play cymbals because it wasn’t Egyptian. She looked disappointed, so I added,

“You dance Egyptian style, and you don’t use cymbals!”

She regarded me for a moment, then arched a well -groomed eyebrow and said,

“Well, the difference between me and you is…I can play them if I want to!”

I began the lengthy and often frustrating process of learning cymbals, but in the end, I was so glad that I did! Finger cymbals aren’t required for belly dance, but if you can really rock (or shall we say “raq”?) On them, they add a lot to a performance. Cymbals played in flawless unison by a troupe is really powerful; a solo dancer accenting her music artfully or doing playful call and response with a live drummer is always really exciting for an audience! If you perform often using recorded music, playing cymbals adds that special live energy.

Here are some tips that will help you become a zill-tastic dancer:

To start off with, you should purchase a set of good quality cymbals that will be easy for you to handle. For beginners, it’s usually better to get a smaller, lighter set of cymbals until you build up your strength and co-ordination, though starting with lager cymbals is fine. No matter what the size of the cymbals, they’ll always seem awkward at first…when I first started, I felt like I had a dinner plate attached to each hand!

Look for a set with a nice tone; if you’re shopping in person, you’ll be able to test them out and see which ones you prefer. If you’ll be getting your cymbals online, there’s no way you’ll be able to test-drive them, so ask your instructor or dancers who’ve been playing for a while which type they recommend.

Listening to dancers playing sagat live will not only help you to absorb the patterns being played, but to figure out which tones you like as well- and it’s all a matter of personal taste. I prefer a mellow bell-like tone, and like my cymbals to ring, but when I asked master musician and dancer Karim Nagi about his preferences he said,

“I would select something a little heavier that one could get good contrasting sounds from, anywhere from deep tones and to high crisp tones. Just like any instrument, chances are you would have to try a few out. Personally I would select something a little heavier- if a set of cymbals sound too bell-like, and I can’t get that chunky, tight sound that I like, I won’t use them.”

Preparing And Caring For Your Cymbals

Some cymbals come with a length of elastic, but if it isn’t supplied, you’ll have to buy it. Look for sturdy elastic braid about three quarters of an inch wide for the type with two slots. If you bought the single-hole cymbals, you’ll need a thin, rounded elastic cord. Next, you’ll need to sew the elastic on to fit your fingers. For the double-slot type, cut four lengths of elastic about three inches long and thread the elastic through the underside of the cymbals. Measure the elastic to fit your finger tightly, turn the raw edge of the elastic over to prevent fraying, and sew the pieces together. For single-hole cymbals you may want to thread the elastic cord through a bead or small button (which will sit on the underside of the cymbal) to add some extra stability. Some dancers mark the slightly larger-looped thumb cymbals by sewing a bead onto the top of elastic, and I sometimes decorate my elastics by gluing a small rhinestone to the top of each one. Yup, I like the glitz!

If your elastic breaks at a gig or in class, you can quickly repair it with a safety pin. Do not pin or knot your cymbals underneath- it ruins their sound by muffling the dome…imagine stuffing a pair of socks into a small bell and you’ll get the picture!

Finger cymbals should be worn very tightly- it’s a running joke among dancers that if you’re circulation isn’t getting cut off, they’re not tight enough! I also think the elastic on cymbals compares to the pointe shoes ballet dancers wear: they’re unbearable at first, then you get about a week of broken-in comfort, and after that it’s time to change them!

The cymbals should sit up near the top of your fingers and thumb- some dancers prefer the elastic to hit at the first knuckle, others like them just below the nail bed. When you put your cymbals on, they should worn with the underside facing each other and, as legendary dancer Helena Vlahos says,

“ They should look like a pair of flying saucers on each hand.”

Cymbals can be cleaned with a soft cloth and ordinary brass or metal polish. Some dancers prefer bright shiny cymbals, others like them to have a patina or a slight amount of tarnish, for a vintage look; this is only an aesthetic consideration and up to you, because they’ll sound the same either way.

Before You Start To Play

Experiment with some of the many tones and sounds cymbals your cymbals make. Here are some for you to try out:

The quick strike of two cymbals together, creating a lingering ring like a bell

A strike with fingers of the hand cupped over the index finger cymbal, producing a flatter sound without any ringing

Strike only the edges of the finger cymbals together, with your fingers cupped or open to produce percussive little ticks and clicks

Put your hands together and strike all four cymbals together lightly against each other (almost fluttering the cymbals) with both hands open, to make a tinkling, sustained ringing sound

Like any musical instrument, mastering your cymbals requires a lot of training. I myself think I bit through like...five layers of skin on my lower lip!

When you’re playing, you will always start on your dominant hand. If you’re right handed, start with the right hand, but southpaws will begin on the left hand.

Practice as much as you can so you can play your cymbals easily and switch rhythms without even thinking about it. Start off doing cymbal drills seated or standing, and then add in some basic movements. After you’ve become comfortable with that, start experimenting with more advanced technique. Eventually, you want to be able to perform quick shimmies, traveling steps, and multi-layered movements while playing. You should also be able to play cymbals with your hands and arms in any position they would be in if you were dancing without them, with palms up or down, arms outstretched, overhead, crossed or moving on paths through the air, and while doing wrist circles.

Getting to the point of playing really well (i.e. on the beat and not at the expense of your movement) will take dedication and regular practice. It can be frustrating, but it will be worth it in the end!

After you’ve mastered the basics and can dance with your cymbals on, there are many ways to play them: to the basic rhythm of the song, to the melody, or just as occasional accents. Los Angeles based Arabic percussionist Donavon Lerman says:

“ I would kinda correlate it to a dancer practicing a shimmy… they have to do it everywhere; in line at the grocery store, while doing the dishes, while eating ice cream… but then they choose not use it too much in performance. When cymbals are used while you dance, they should be strong and in the right place.”

Here are some basic, commonly used patterns for practice. Again, because most people are right handed, these patterns all start on the right, so just reverse them if you’re a leftie.