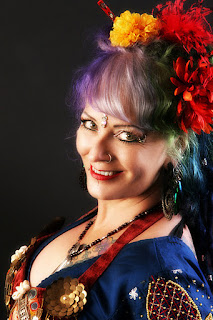 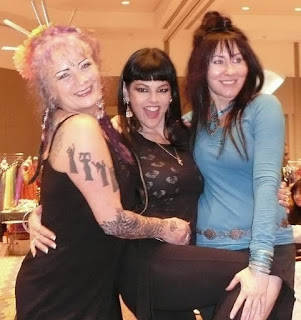 This is Part Seven in an on-going series of articles I am posting, which shares the ways that well known- and in some cases, wildly famous- dancers prepare for their shows.

Everyone I spoke with had a highly personal take on getting ready for taking the stage.

For most of you, Kajira Djoumahna needs no introduction. She is one of the queens of Tribal Belly dance, an innovator with an illustrious career that has been spanned over two decades and shows no signs of slowing down. Kajira’s the founder, creator and “Chief Imagineer” of The BlackSheep BellyDance format, and along with her husband Chuck, is the producer of Tribal Fest, the largest and longest-running Tribal belly dance festival in the world, which takes place every May in the beautiful Northern California town of Sebastopol. She is a writer, with a regular column for the belly dance magazine “Zaghareet”, but more importantly, she is the author of the definitive book on Tribal style belly dance, “The Tribal Bible”. As of 2010, “The Tribal Bible” has been through six printed editions. Kajira has many instructional and performance DVDs on the market, and teaches and performs all over the world.

Kajira and I have known each other pretty much since the beginning of both of our careers, at the dawn of the 1990’s. We met in a really crazy way, and became fast friends. Happily, the craziness never stopped.

Before I started belly dancing, I was a wild rock ‘n’ roll chick… some people in the dance community think I’m wild now… but suffice to say, they didn’t know me before! I was a Hollywood punk rock fixture. I recorded albums and toured all over with my all-girl band, The Screaming Sirens, I booked clubs in Los Angeles, and under my given name, Pleasant Gehman, wrote extensively about rock ‘n’ roll for many national and international publications. There was a little bit of crossover time between my two careers before I began devoting all my time to dancing.

So, how does this relate to Kajira?

About twenty or so years ago, I’d written a profile of Iggy Pop for a well-known rock magazine, and when the editor asked me for a photo for the Contributors Page, I sent a picture of myself in my belly dance costume. Weeks later, on one of my visits to the office, the editor told me the magazine had published a Letter To The Editor that a reader had sent in.

Handing me the original letter, he said with a somewhat perturbed look on his face,

Upon hearing the Arabic word for “yes” I was highly intrigued, and grabbed the letter, which was from…. you guessed it- Kajira!

I wish I still had that letter, but sadly, I don’t, so I’ll paraphrase it. Basically, it went something like this:

“ A big “AIWA!” on the Iggy Pop story- I can’t BELIEVE there is another belly dancer out there who is a writer, and who also loves rock and roll!”

Well, at this point I started hyperventilating- because I also couldn’t believe there was another belly dancer out there who loved rock ‘n’roll in general and specifically Iggy Pop!

You must remember that this was pre- internet, and before cell phones. At that time, most of the women that I met who were into belly dancing were doing it as a hobby, and were, like, suburban housewives- I knew I loved this dance and was already obsessed with it, but I didn’t have jack in common with the dancers I was meeting.

Also, a in those days, most of the places that were featuring belly dancing were Arabic clubs and restaurants- I had to cut off my dreads and dye my hair from punky rainbow stripes back to it’s original color, and hide my tattoos in order to be able to get dance work…as well as borrow “normal” clothes from my mother because I only owned stuff like leather mini-skirts and ripped fishnets, and you couldn’t wear that stuff to Arabic clubs!

I couldn’t believe there was a kindred soul out there…someone who also loved rock ‘n’roll, writing and belly dancing- I was hearing angels sing because I Wasn’t Alone!

I began hounding my editor to find the envelope that the letter had come in, so I could get the return address and write a letter back to this woman who shared my passions. Finally, he did.

A couple of days after I’d written her a letter, Kajira called me, and we stayed on the phone for ages, talking about our favorite bands, writing, and, of course, belly dancing.


Kajira had just started studying with FatChanceBellyDance founder Carolena Nericcio and was making the transition from cabaret style to Tribal. Meanwhile, I had been studying with a woman who had been a student of Jamilla Salimpour, and a chorus girl in Bal Anat. I’d been learning Jamilla’s folk-based Ren Faire style, but after my first trip to Cairo, was starting to get heavily into classical Egyptian dance.

Kajira and I started corresponding through snail mail, writing lengthy letters and sending each other costume pieces. She'll probably kill me for mentioning this, but she sent me a pink lace and gold lame ruffled cabaret skirt that she was no longer using, and I sent her a hand-embroidered Bedouin vest that I’d gotten on my first trip to Egypt…which I, having “gone cabaret” was no longer wearing.

Soon, Kajira called me and excitedly told me that she would be down in Southern California to do a workshop with the legendary Morocco in Anaheim. I was rehearsing for a show and couldn’t make the class, but we made arrangements for her to come up and spend the night at my house after the workshop was over.


I wound up taking her to my favorite Hollywood dive bar, The Blacklite, a place that not only had a great jukebox, really cheap and exceedingly strong cocktails, but also was populated mostly by tranny hookers! We drank boatloads of margaritas and I dimly remember buying a bunch of studded belts for, like, a dollar a piece from a bag lady that had wandered into the bar.


The rest is history- we stayed in touch and kept track of each other’s personal dance –paths and career progress. In 2005, she asked me to teach at Tribal Fest for the first time; in 2006, beginning at the MAJMA festival in Glastonbury, England, we started meeting up with each other at various workshops and events all over the world.

But maybe the most insane dance festival experience we shared actually took place at her own event! A couple of years ago, we hung out in an equipment closet (cause it was quiet and private) in the back of the Main Hall, at Tribal Fest, while Amy Sigil of Unmata was teaching, and shot the breeze, while Kajira was being interviewed for the belly dance magazine “The Chronicles”...while simultaneously getting tattooed by artist Natasha Vetlugin. Yes, just a “normal” day in the life of Kajira Djoumahna!

Anyway, this is what my longtime friend - and globally acclaimed dance figure- Kajira has to say about the way she prepares for her shows:


“ As I put on my costume and makeup, I start my backstage process. Even if I'm still at home looking into my own mirror, I am now "backstage". If I hadn't become my stage name by now in all of my life, I would "become" it at this point; as I don my makeup I also don my persona. I become larger than life, I take on a new idea of myself as I transform my physical look.

At my destination (assuming I got ready at home or a hotel) I put on my finishing touches close to the time of my performance. These consist of my belt, lipstick, sometimes Paws or other dance shoes, and heavy tribal bracelets. Once fully adorned, I stretch and breathe and ready my finger cymbals for a quick put-on.

After my cymbals are on my hands and the time is even shorter, I always do a backstage centering meditation in the form of an East Indian pranam, or "puja for the stage". My personal pranam (also known as a prayer, moving meditation or centering exercise) is a variation of my teacher's. Everyone in my classes learn this as well, as it serves to set apart sacred time from mundane and it really works to help change focus and bring one into the "now".

My "prep" is still not over, whether I'm performing with BlackSheep BellyDance or solo! Once on stage, I almost always make a circle when I enter to help me "claim" my space and set it aside in my mind from anywhere else. If I cannot make a circuit because of my style or choreography that day, I do so in my mind to delineate my space from everyone else’s.

Now fully prepared, I lose myself in the moment and just dance!"

Tribal Fest 12: The Year Of The Unicorn:
http://www.blacksheepbellydance.com/tf12/

PHOTOS: KAJIRA BY VICTORIA WEBB; KAJIRA, PRINCESS FARHANA & LEE ALI at BELLY DANCER OF THE UNIVERSE
Posted by Pleasant Gehman/Princess Farhana at 12:02 AM