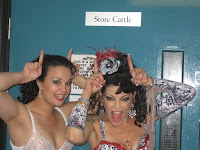 We all know how crazy things can get when you have a show, and it doesn't seem to matter if it's your first-ever performance or just another hectic week traveling to an out-of-town workshop and show in the life of a professional dancer. Show days and the prep-time that ensues are always magnets for insanity, with the phone ringing non-stop, furtive hunts for costume pieces and lost liptsick, burning CD's, getting directions on-line and last minute emergencies- it never fails!

Before leaving for your gig, even if you are a seasoned pro, take a minute to check your gig bag and collect everything, including but not limited to your costume, finger cymbals and music. Make sure you’ve packed your iPod and or CD’s,a back up CD in case the sound system can't/won't play it, or even a different set burned onto another CD in the event that another performer might be using the same piece of music. This happens more than you might think!

The moment you go onstage is not optimal time to test out a new piece of music, so whether you are doing a choreography or improvising, make sure you are familiar with whatever it is you're about to dance to.

If you are working with a live band, learn the names of at the very least 4 or 5 popular Arabic songs that you are familiar with, so you can request the songs you want and there won't be any surprises or “mystery music”. Always bring along a pair of dance sandals, ballet slippers or ballroom shoes in case the floor or stage is dirty or splintery. Your gig bag should also include necessities like a cover-up, make-up for touch-ups, a sewing kit, band-aids, tampax, baby-wipes or a small a towel, and bottled water.

Though you are undoubtedly familiar with this concept… PLEASE WARM UP WELL BEFORE YOU DANCE! If you get injured while performing, you will lose out on future opportunities and jobs, as well as your own dancing pleasure… not to mention the fact that you’ll be in pain! It’s also an absolute necessity to stretch and cool down AFTER dancing or rehearsing, as well.

If you are not beginning your performance onstage, before you enter, let the musical intro or a few bars go by before you hit the stage, to add some drama. When you make your entrance, it's good to move around the whole stage or performance area to establish yourself to the audience. Let them get a good look at you, and become accustomed to your unique presence. Dance into your performance space as though you are claiming territory. You can’t afford to be tentative- a nervous dancer creates a nervous audience!

If you enter “old school” style with your veil wrapped, let some time go by before you remove your veil, to add a touch of suspense. If you are entering Egyptian style (sans wrapped veil) do a few circles of the stage, some light veil work, and either ditch the veil altogether (out of your dance path and in a place where no one can step on it) or put it into "storage" by wrapping it around your neck, so you can use it later at a slower point in your routine.

If you are going to incorporate a prop, make sure to “introduce” it to your audience, so the crowd can get a full appreciation of what they’re about to experience. For example, instead of just plopping a sword onto your head, make sure to really display it to it’s fullest advantage, letting the lights gleam on the blade, so the audience can appreciate that it’s a a real metal sword and not a fake. Be aware of the angle of your props, too. Fans, for example, are best displayed FLAT to the audience, so the crowd can see the full “wingspan”.

TAKE YOUR TIME! Don't give everything up at once. Walk in like a queen, the DIVA that you are, and show yourself off. Let the audience get a good look at how beautiful you are…let them admire your costume, and wonder about where this dance journey will take them. Start building the energy level slowly; save some tricks, whether it's veil work, snazzy zills, crazy shimmies or great undulations-whatever- for later, to keep the audience interested. Remember that sometimes onstage adrenalin makes time seem to go by differently, so mentally remind yourself every so often to relax and slow down.

In many Arabic night clubs, dancing among and around the tables is discouraged, but this is perfectly acceptable at belly dance showcases, most restaurants, and especially at parties, unless the host has requested that you don’t. Some people equate this with soliciting tips, and believe it looks tacky. Acceptable ways of being tipped are: having the money showered over your head, Arabic club style; bills being (politely) tucked into your costume; money being handed to you or to the waiter (for you) after your performance. Though it goes without saying, being groped by customers or having bills offered to you ORALLY are not only disrespectful to you, but completely unacceptable in any arena or venue! Don't stand for this sort of behavior. However, if there’s a troublesome drunk or an obnoxious kid in your audience, you can usually deflect the situation humorously by embarrassing the person whose doing it. This will usually stop the idiot from continuing, as well as take the threat out of the situation. By pulling a comical, over-the-top “I’m shocked!” type of facial expression, or just shaking your head no, like the tipper has to be crazy, you can usually get your point across. More likely than not, a member of the party the offender is with will ask him to stop so you don't have to. Remember: ultimately, YOU are in control of YOUR show. If anyone really becomes a problem, remove yourself from the situation immediately and explain the matter to the owner, manager headwaiter or person who hired you. They don't like this sort of vulgarity, either; it puts a bad light on their establishment.

Though this doesn’t usually apply at haflas or dance festivals, if you are working a club or stage show or even a private party, try not to mingle with attendees or customers in your costume before or after a show. To do this is not a faux-pas, but it does kind of diminish the magic you are creating for your show. Either throw on your caftan, or change quickly. Don't ruin the illusion of your costume by parading around in it. If you are working at a club or restaurant, you might want to bring a second costume if you have more than one show, too.

And a word about dressing rooms: no matter WHO you are, where you perform, or how long you have danced, a good dressing room is hard to find! In spite of what our dressing room fantasies are, dressing rooms are usually tiny, crowded, too hot or freezing, drafty, damp, or stuffy. They are rarely well-lit, and there is never enough mirror or floor space, especially if you count in multiple performers, and this goes double at dance festivals. I have changed in toilets, outdoor sheds, hallways, broom closets, even in the stage wings. Once, at a huge dance festival in Salisbury, UK, the performer’s dressing room was a cattle storage pen! I kid you not…it was clean and there wasn’t any livestock around ( thankfully!) but still, it was crazy. Of course, I couldn’t resist a photo-op!

Many venues or event producers provide water and food ( or snacks, at least) but be prepared! Long tech rehearsals or waiting around during a full-length show can take it’s toll on your appetite- and your stamina. It’s hard to perform with a growling stomach or low blood sugar. Keep some nuts or a nutrition bar in your gig bag along with some bottled water. Leg-warmers, slippers, a towel or baby-wipes, a light sweater or hoodie might be things you wish you’d thought to bring along! Try to have a friend watch your purse, or find a secure place to leave it while you perform. Also, in spite of whatever you want to think about the morality of your sister dancers or, for that matter, the wait-staff, if you are gigging at a large venue with many other acts, and you don’t know the people you are working with or working for , lock your suitcase!

After your show, remember to pick up your veil, zills, swords, or other props after your performance. Also remember to get your iPod or CD back, and double check your costume bags so you don't forget make-up, small costume pieces, shoes, tips or anything else. Do a double-dummy check- especially in crowed situations. Recently, I left an entire make-up bag backstage at the “Tales Of Desire” DVD shoot. It was so hectic and crowded backstage it was hard to tell where one person’s suitcase left off and another began! There was stuff literally littering the entire floor! If it wasn’t for Sabrina Fox of Atash Maya, I would’ve lost all my shit… and no make-up is a death sentence for a glammy Princess like me!

Check about the ethnic customs and/or general taste of the audience you will be dancing for, If you are uncertain about a risqué costume choice, for example, it’s always safer to go with something a bit more covered up. Though it’s hard to believe, some people still frown upon tattoos, as do many Arabic clubs,so you might want to cover them with clothing or make-up. Recently, with tattoos and piercings becoming a mainstream trend, this may not matter as much as it used to. I myself am heavily tattooed and pierced, and have not encountered any problems- but it does ultimately pay for you to be aware of what your audience’s comfort level is. When performing at strictly belly dance events put on by other dancers or at parties thrown by friends, you can be a bit more lax about everything, assuming you have a handle on your audience’s taste and preference.

Remember, you may be the first belly dancer someone has ever seen. Do everything you can to put on a beautiful, amazing show. Relax and have fun, and your audience will, too. Always be professional as possible….and once again: warm up! IT’S THE LAW!

Pictured: Dancer Rachel Bennett and I hamming it up backstage in Salisbury, UK, June 2007…in the Cattle Pen!
Me backstage at the "Tales Of Desire" DVD shoot for Hollywood Music Center
Posted by Pleasant Gehman/Princess Farhana at 10:48 PM